Day 51: My first day of work in California

I haven’t worked an institutional job in almost a year (quit date last year in Mid-June, then on to a self-directed job in media creation and perhaps self-destruction).

Today, I had my first 4-hour shift at a chain coffeeshop in San Carlos (an affluent neighborhood).

After my shift (as if by Fate), I chatted with one of the customers who’s a bipolar manic painter (like me, but older by 30 years, more experienced, more accomplished more secure of herself and her surroundings, grew up around Silicon Valley, so not really like me except for a few aspects, but still, an amazing coincidence). She recommended her church (which I can’t really attend because I work Sunday morning).

Holding orders in my head wasn’t easy, but no one expected me to be great and so the stress was very handle-able. Repeating orders back to customers is very important. Pressing the right buttons on the register even though they are in an illogical order/formation/redundant/confusing/whatever is important.\

Here’s an Emily Dickinson poem that I found through my research of psychosis that I enjoyed and related to:

“I felt a Funeral, in my Brain,
And Mourners to and fro
Kept treading–treading–till it seemed
That Sense was breaking through–
And when they all were seated,
A Service, like a Drum–
Kept beating–beating till I thought
My Mind was going numb–

And then I heard them lift a Box
And creak across my Soul
With those same Boots of Lead, again,
Then Space–began to toll,

As all the Heavens were a Bell,
And Being, but an Ear,
And I, and Silence, some strange Race
Wrecked, solitary here–

And then a Plank in Reason, broke–
And I dropped down, and down–
And hit a World, at every plunge,
And Finished knowing–then–“ 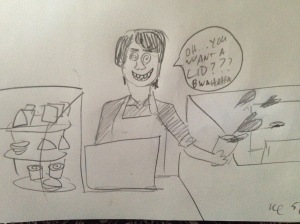 Here’s a quick sketch, trying to get back into expressing myself visually. It’s interesting to see what comes out. It’s just floating on the top of my head as a self-caricature of the day. Maybe I’ll do one tomorrow. It’s fun to think about starting a comic series of my life. Just getting the pencil in my hand, it’s like putting on the sneakers to the life that I want.