Unfold, the Story Behind the Idea of the Story of an Idea

I was getting a little nostalgic for graphic design school. Where a little over a year ago, I was a part of two brainstorm sessions where we came up with the concept for the promotional video for the portfolio show. The foundation of these sessions were word association techniques. The theme for the portfolio show was “unfold.” At that point, we received some branding from the branding team, a mood board with flat angular triangles and some transparency play.

Out of a word association session, we’ve collectively generated and selected these words associated with “unfold.” 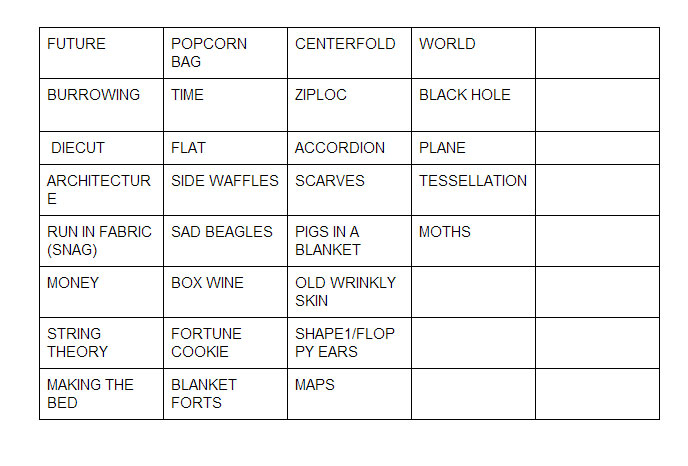 We came up with the following concept threads. Perhaps if we pull on one a video series will come out.
Paper stylized landscape, flags waving, a shoebox diorama with stuff growing, pre-wrinkled, a globe spinning towards it, flat map, landscapes fold out.
A new scene: transitions, movement, a blanket or a curtain folds back to reveal a different time. Time, we are graduating. Remind yourself of that.
Documentary meets surreal. Waking up, fast cuts, vivid sounds, the habits of the morning, making the bed, folding stuff, sealing ziplocs, jarring sounds, dilation.
Create mystery. Magical realism. Sad beagle as a character. Narrator? Unaware of the strangeness unfolding?
The future: white, floating. Something happening several different times, different perspectives, points of view like an artsy Groundhog day.

We started to talk about how the ideas from last brainstorm were of two worlds, the abstract and dreamy surrealist landscape and the documentary-making-the-bed-type-scenario.We noted that the interesting part is where those worlds intersect. Where there is mystery, boundaries blurred. Intro sequences from the 80s.
Ways of intersecting: rips through, somebody walking on a sidewall and falling through into Jill’s grid book. Time speeds up, time dilation, space, rippling pattern. A reference to The Whale Hunt / A storytelling experiment / by Jonathan Harris.
We liked Scott’s video of an animated mask, folding over a video of him running with wings. It was suggested maybe we’d translate an old myth like Icarus. It was then suggested that a simple original story would be better. That moment of making the bed, the morning routine. “A day in the life” doesn’t describe exactly. It’s more like a day’s time passing as a plethora of stories unfold and we have a string tying them together. Multiple perspectives like Slacker (a movie) that follows different people and they come in contact with each other like they are handing off the story. Transferring the story. Each part of the series ending right after the hand-off is made and a new story is just about to be told, the moment of mystery and expectation.
Hand off a physical object? Like that one movie’s title sequence where you’re following a briefcase. (Annie gets the brilliant idea) Hand-off an idea. A shape or something that is floating over the persons head. (Perhaps it looks like a triangle with different things). Dilate, expanding. The idea becomes the story. The idea gets bigger filling the screen, gets physical characteristics akin to a Thanksgiving Day Parade float that grows in size until it needs multiple people to carry it and soon the float envelopes the creators. An idea passing, collaboration, idea forming, path of an idea.
What does an idea look like? A snowball? Paper? But not paper, something ethereal, not quite like anything as we know it. Forming, forming, pans out and submerging. With many sides and colors (forms logo at the end?)
There as a debate as to the origin of the idea-object. Is it passed from one person to another and we are just seeing a small snippet of its journey? Or do we watch the birth of it? Being a small flickering bit of light and then it evolving into something more.
Does it –the visualization of an idea–manifest at the Portfolio Show? Is it like Krispijn’s presentations of light, blurred? Does it show itself as a flickering thing? Like a hologram from StarWars, shifting and fading. Does that mean it’s dying or affected by the crowd of other ideas at the portfolio show? It’s a creature where the surrounding ideas transform it like a Thermin loop. Feedback loop? Kinetic effects, gif, looping, layers of opacity of animations, symbolizing other ideas in the area.