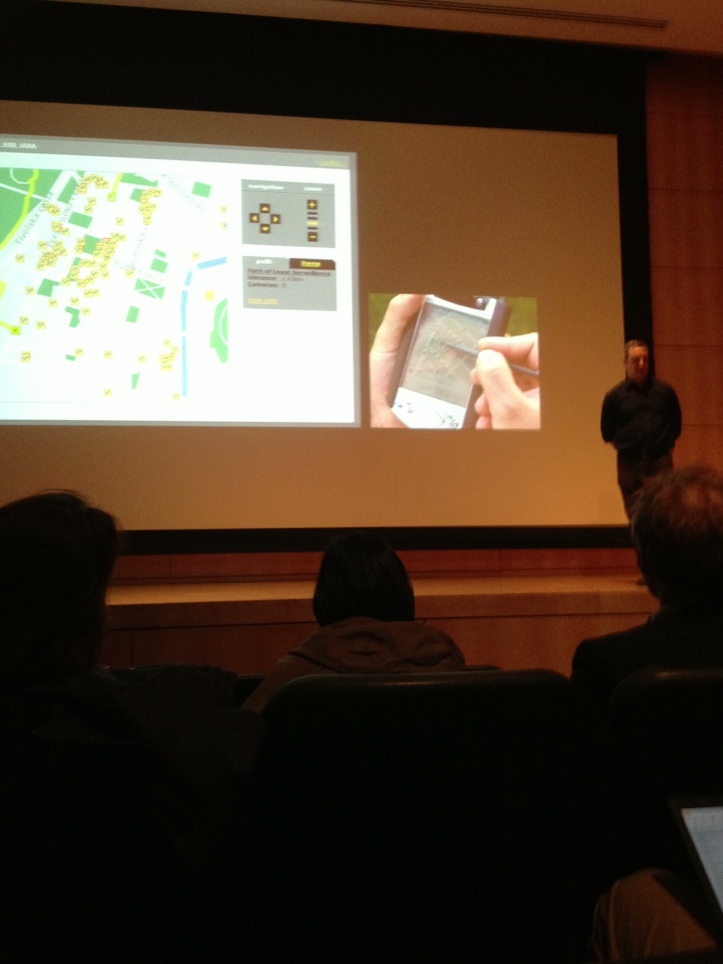 “You are cordially invited to a lecture/presentation by UW Interaction Design faculty member Tad Hirsch. This public lecture is part of the UW faculty reappointment process. The event is free and open to the general public.

Tad Hirsch’s research focuses on interaction design in urban environments with a strong emphasis on advocacy and civic engagement, and often involves collaboration with NGO’s and community based organizations. His work is strongly influenced by public and critical art practice, and has engaged with issues such as human rights, environmental justice and community empowerment.

Prior to joining UW, Tad was a Senior Research Scientist and Manager with Intel Labs. Tad was a member of the Rhode Island School of Design’s Digital Media faculty from 2006-2008, and has taught courses in art, design, and engineering at Carnegie Mellon, MIT and the University of Oregon. Tad earned his PhD from the Media Lab at MIT; an MDes in Interaction Design from Carnegie Mellon; a MSc in Media Arts andSciences from MIT; and a BA in Philosophy from Vassar College.”  (from the facebook event description)

I went to this event last night and he talked about his design projects.

Tad Hirsch is one of the main guys behind Institute for Applied Autonomy.

Tad Hirsch is one of the main guys behind Public Practice Studio.

Tad Hirsch emphasized engaging in a place in a multi-layered way. He talked about his collaboration with the Frye Art Museum. The Frye wanted to relate to their geographic community, Yesler Terrace. Through the project Intangible Effects, Tad Hirsch celebrates Yesler Terrace through sound. The local high school students were involved in interviewing the residents of this neighborhood. The sounds of ambient noise such as the nearby highway, performances of the community members and clips from the interviews create an ephemeral and authentic view of Yesler Terrace, destined for destruction (read The Twilight of Yesler Terrace by Charles Mudede). 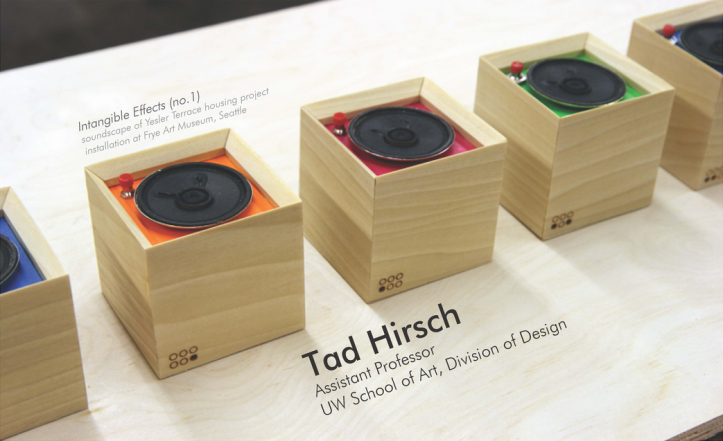 Questions
Tad took some questions after his lecture:

Tad explained about how the students used the architecture production labs at UW to create their works then drove it over to the location of Twisp Works to install the pieces. He emphasized how important design is and one of his goals is to take design to rurual communities.

One audience member (my webdesign teacher, actually) asked about measuring the success of the pamphlet-inserts from the Pivot project and about the distributing locations. Tad answered that distribution was more of his collaborator’s choice. And that they haven’t invested in a separate number other than the national hotline because of budgeting. That was interesting. That was a hint to me about how design isn’t just presenting a solution but then measuring the effectiveness of that solution.

One question was about how we can better support community engagement as teachers for our design students. Tad answered that 10 weeks isn’t enough time to go out into the real world and make connections. By stringing together courses, students have more time to really get to understand a project and the people involved. By getting organizations involved in the classes, what he called “sponsored classes,” connections are made where the people are brought to the students instead of the other way around.

Someone asked about what Tad sees for his students once they get out of the UW design program. What is the trajectory? Tad talked about how some of them will go into design consultancy, others product companies and a few will go some place unexpected or unrelated. These students are just getting to know themselves and a huge part of the program is to undersand your values and skills and chart a career that is right for you.

As an artist and a professor, has there been a time when your ethical code was conflicted? Tad has been involved in NGOs and sometimes very political situations. He’s walked away from proejcts that have taken directions that differ from his goals. He emphasizes that it’s important to have core values as a designer to which that you can stay true vs. an ideology that limits your world view.

I love these kinds of talks where someone talks in front of a large audience and talks about their projects. There’s passion, cleverness and utility with these projects that’s very inspiring. As a graphic design student (who’s just in her second year of design), I am realizing that the world is such a big place and that design is problem solving. It isn’t just logos and advertising, but it’s a conversation starter, a device, a mechanism, a system. I’ve been trying to draw the line between design and art as a way to understand design better, but they also have a lot of similar goals of reaching people on a unique level to inspire and evoke reactions, interactions.

I haven’t been involved in social change. I haven’t found the tools, haven’t the skills, but it’s rapidly changing to a world where technology, design and communication (things I’m heavily interested in) are coming to be the most relevant and effective components in strategies for change. I attended this event with some people from my school, Seattle Central Creative Academy, and we’ve started to have a conversation about UX. What happens when you put an amazing socially-minded designer like Tad Hirsch in a room with UX designers and hardcore developers?

Design is powerful. The more thoughtful it is the more powerful it is. I have to remind myself that though I have only one more quarter of design school, it’s not the end. It’s the middle of the beginning.