Ginny: an App in 2 hours 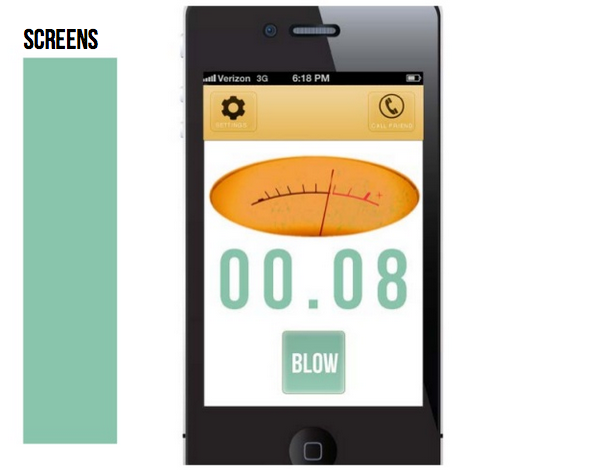 Today, in groups of four, the class tackled the idea of a breathalyzer app. We had about 2 hours from hearing the assignment to presenting it. If you could use your phone as a breathalyzer to measure blood alcohol content, what is the app for that?
With my team of Scott, Joyce, Nathan and myself, we introduce Ginny. It’s a friendly and simple interface that assists the user in checking their breath and go home via walking or cab. This is an app that uses (would use) geolocation tagging mixed with a social component in a way that it’s a breathalyzer app that broadcasts to your friends where you’re getting drunk.
Watching the other presenters was really helpful. If I were to do this project over, I would include more progress bars. One of the projects had really clear wireframes, but no skins. Especially with fast projects like this, it’s a smart strategy to spend time on making wireframes that communicate something thoughtful and user-centered than a shiny brand with a smiley mascot.
I really liked the Drunk app that was presented. It’s most impressive component being the voice of Samuel Jackson chiding you for your drunkenness. An app benefits from being shareable and who wouldn’t want to share that with their friends? It was said in class that the most difficult part about apps is finding the right market and really satisfying the needs of your audience. This app could have been the novel “party” app where you show your friends how drunk you are or the “safety” app where avoiding a DUI (driving under the influence) is the goal.