My assignment for advertising class: creating an ad campaign for Square One Bistro, an eatery put on by the students of the Seattle Central Culinary Academy. My deliverables 3 tabloid-sized (11″X17″ posters).

A big improvement over my thumbnails last week. I started this campaign with the idea of drawing parallels between academics and food–thanks for the idea, brainstorm group! What I am to end up with are comps. Comps are polished drafts– exact proportions. These have placeholder photographs that I took in Square One Bistro. They were really friendly and let me photograph. I used Century Schoolbook font on my poster. When it came to dealing with their “logo”–they don’t really have one. I struggled on where to put it. I put it top and centered like a menu or a penguin book. In critique, Tom noted that it competes with the headline. I used adobe photoshop to create the posters. Everything has a hue/saturation layer. The biggest comment in the critique was the color– and the border. I chose yellowy hues to give the feeling of an aged poster, something of nostalgia and a warm institution. The comment was that “yellow backdrops make anything in front of it less delicious.” They are probably picking up on the idea of “aged” paper and therefore this must be really old food. The hand-drawn type–I did myself with a highlighter marker– gives it a little attitude like the editorial graffiti on a propaganda poster. I isolated the pictures to create that 50’s cut out ad look. In critique, there were some typographical issues, leading and my first typo. It’s PRErequisite. I was so disappointed in myself. It’s a bad friday when I submit a typo for Tom to point out to the whole class– nothing gets by him! 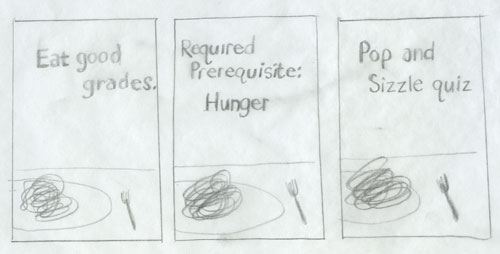 I love seeing this drastic improvement. It looks more contemporary and the items really pop.