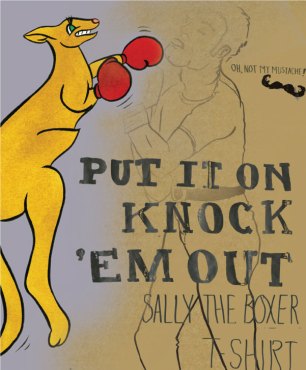 Here’s the full page ad I made for a tee-shirt that was designed by a another team in the class earlier in the quarter. My art director (fellow classmate), I don’t think she liked much of this. I’ll admit that the handwritten text is a little wonky, but I like it. The grey background threw off my team a little too, but I wanted to keep it because the shirt is grey. I think that most tee shirt ads are very simple. Picture of a cool kid wearin the shirt. I wanted to keep the illustration of the boxer in the ad, but my AD (art director) wants to go more of a text route. When is it a good time to put my foot down and say that I am the designer, I am designing the thing, versus listening to my appointed superior. I have a vision. So does she. The last project, I didn’t witness all the negotiations that go from a designer and an AD. What’s normal? What’s acceptable? What’s tolerable for me? This whole quarter, I’ve felt like I’ve put my point of view to the team and they’ve nixed almost every idea that ever sprung from my brain about the thing we’re working on. I’ll revise this. I’ll make it neater. Perhaps take out the hand-drawn type in favor of something more punchy. (Pun!)

Illustrator Credit to David Choe for the Kangaroo.

Update After the first AD critique: 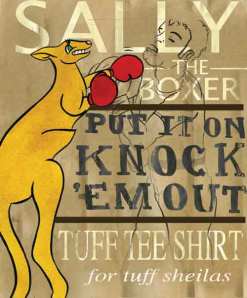 She gave me some font advice (and I upped the contrast on the textured background) and here’s the latest version (below): (update 3-14 and the one that came before is the one below that– in other words, the biggest image is the most recent.)